Where have we been and where do we go from here?

As we sail towards the final days of 2020 there remains undoubtedly the many questions on our minds as we move towards the end of an emotionally impossible year.  The coronavirus swept unnoticed into the U.S. in January 2020 and began its deadly spread across the country from both the west and east coast.   March saw many states curtail all activity via “Stay at Home” orders. The Federal Government stymied and sabatoged by the Executive Branch sat passively in denial while the States grappled and bid against each other and the Federal government to secure enough supplies to mount a response to the numbers of people beginning to fall to an unseen deadly flu virus.  Initially the virus reached the U.S. via the West coast with cases spreading quickly in the Seattle area and within Los Angeles County in California.  New York City provided the main access as the Euro version of Covid-19 brought the famed Apple literally to a stand still.  The United States would ultimately become the global leader in the number of reported COVID-19 cases, hospitalizations and deaths.  And ten months later the United States continues to hold and build upon its top positions as the Trump Administration deliberately, under the lack of leadership, pushes the United States towards an abyss from which it may not be able to quickly recover.

And on the way to the abyss: 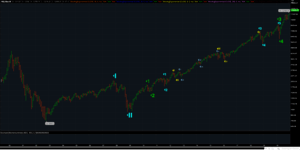 Taking a look into the rearview mirror of 2020 brings revelations of the good, the bad, and way too much ugly. The financial markets, with a standing ovation to the continued dominance from the Tech Sector, made mincemeat of all naysayers as it initially dropped 30% in March as the panic driven ride down ended up being the largest buying opportunity of the 21st century.  Thus far the NASDAQ 100, has reached new all time highs in 8 of the last 9 months.  This all the while many, many people lost jobs, housing, health insurance and the ability to “keep one’s head above the water.”

What could possibly go wrong?

Thursday’s trade was revealing and wild ending with the trifecta of surprises.  The upside END_OF_DOCUMENT_TOKEN_TO_BE_REPLACED